Happy Monday & MLK Day of Service. If you’re able, I hope you choose to provide some kind of service to someone each day, whether that’s paying for someone’s meal or holding the door open for someone behind you. Never underestimate the power of even the smallest acts of kindness.

I also hope that you are all well and staying warm. It has been in and around the single digits here in South Jersey–the wind-chill in the negatives, even! Prior to the sudden drop in temperature, I seem to have caught the flu. That’s what I get for not scheduling my next doctor’s appointment in time. Fortunately, my throat is not quite as sore (though I seem to have developed a bit of dry mouth and an irritating cough), my fever has gone down, and I seem to be able to breathe through my nose again (except doing so while sleeping is still a challenge). Anyway, I’ve broken out the nastiest cough syrup ever and my humidifier again, so here’s looking to continual recovery!

Today, I’m eager to share with you two somewhat rapid reviews of biographies I recently finished in the last couple of days. I think these are perfect to share for today’s holiday because both are about people whom I admire and respect very much and, in their own ways, serve others humbly and with dignity.

Michelle (because I consider myself not worthy to refer to her Majesty as Miche) is the embodiment of womanhood in all its grace, beauty, and poise. Even as a young girl from the South Side (of Chicago), she has been confident and determined to make something of herself, get ahead, and become someone important who makes necessary and worthy contributions to our world (which she has done and continues to do with all of her being). But just like many of us, she took piano lessons (though, maybe she strived to be a little bit better), dated and smoked weed with boys in their cars, and longed for a family of her own.

Her writing is reflective of all that I know and have heard about her through my television and other media–abundant in eloquence, finesse, and dignity. Though her language is sophisticated and her story quite lengthy, she is personable and relatable. With every page turn, I respected and loved her more. She invited me into her home and her mind and her heart–I often felt under-dressed, as if I were in the presence of royalty. But her soothing voice across the pages comforted me, encouraged me to get comfortable in my PJs and share a glass of wine with her.

Her ability to overcome adversity, both hers and her husband’s, demonstrate her strength as a woman of color, a wife, a First Lady, and a mother. Her service towards military families and dedication to teaching young people to make healthier choices and “play more” are evidence of her unending passion to make the world a better place. She is a gem, a Queen, a blessing for us as human beings. We are so lucky to have someone like her inspiring us and all young people, especially young women, to be better, to strive for greatness, and to be our true selves in a world that is rich in diversity. 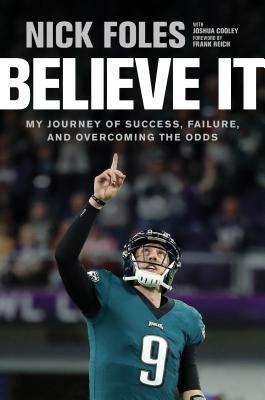 Believe It: My Journey of Success, Failure, and Overcoming the Odds by Nick Foles with Joshua Cooley
Autobiography/Memoir
My rating: 🌟🌟🌟🌟🌟 5/5

Nick Foles is a man of great talent, humility, and faith. I could be considered biased as an Eagles fan, but I was drawn to this book because of Nick as a person—how he gracefully and humbly presents himself to the media and in his career. If I honestly just wanted to re-live last year’s NFL season, I could have watched highlights on Youtube (and trust me, I’ve done exactly that countless times) or my DVD of Superbowl LII. But every time I watched Nick play, read his tweets, and viewed his media appearances pre and post games, I kept thinking, “That is a good man.” I was eager to get into his head and decipher what the Nick Foles magic was really all about.

The book reads very YA. His voice is charmingly simple and accessible for readers of all ages. If you like Nick Foles, football, or just non-fiction in general, you may very much enjoy this. He details his entire football career since high school, honestly recounts his struggles in the NFL, and replays memorable games, including the big one that made him the 2018 Superbowl MVP.

His love for Philadelphia and its rowdy fanbase is extremely endearing. He perceives their craziness as passion and their frustrations as tough love. Like I always say, nobody hates [and loves] the Eagles as much as Eagles fans do.

You don’t have to be Christian to read this book, but you should respect how one’s spirituality greatly impacts their life and how they live it. Dispersed throughout are Nick’s favorite Bible verses and his constant reflections with God when he is unsure and afraid of what’s to come. As a Christian myself, I was moved by his dedication to glorifying the Lord through his work and service to others and his endless gratitude to God for everything in his life: his career, his family, his wife & child. He never boasts in his accomplishments, but instead thanks God for the opportunities to do what makes his life joyful and worth living.

Nick is an actual saint. He never blames anyone for his faults or gets angry at those who lead him to roadblocks he is forced to overcome on his own. When he is traded by the Eagles to the Rams, a segment in his life which almost led him to ending his NFL career prematurely, he takes on all those burdens upon himself and trusts in God to help him find his way to the right decisions. He was never jealous of Carson Wentz or any other quarterbacks named starters ahead of him, but rather he viewed his “back-up” status as a role of mentorship and support, as a way of serving others and serving God.

But even for those without a religious faith, Nick’s story still holds some very important messages that resonate universally, especially this: finding strength in human weakness to overcome adversity. Through his life, readers learn how important it is to take everything one day at a time and to go with your instincts, especially when things don’t go according to your plans.

Who is someone you admire deeply and have dedicated their lives in some way to serving others? Have you read any biographies about them? I’m not generally a non-fiction reader, but I just have so much respect for Michelle Obama and Nick Foles that reading their books made them especially enjoyable.