Happy Monday, blog friends. Can you believe that Halloween is already almost here? Before you know it, it’ll be time to stuff our faces with turkey (or vegetarian/vegan options) and then spend hundreds of dollars on Christmas gifts (my most favorite time of year).

I had promised to elaborate more on my thoughts regarding both the novel and Netflix film of Jenny Han’s To All The Boys I’ve Loved Before and I am FINALLY here to do so! This is quite a lengthy post as I don’t always know when to shut my mouth when it comes to talking about books…sorry about that.

For those who truly do not know, the story revolves around high-schooler Lara Jean Covey who writes a letter to anyone she’s had an intense crush on, expressing the depth of her feelings–but she never sends them. Her older sister Margot, who has recently just broken up with her boyfriend, Josh (one of Lara Jean’s old crushes), leaves for school in Scotland and so Lara Jean is officially placed “in charge” of the house (their mother has passed away). The letters that Lara Jean has written over the years have somehow been mysteriously delivered to their recipients, forcing her to face the various boys she’s been in love with, including childhood friend Josh and the beautiful (and extremely popular) Peter Kavinsky.

My thoughts on the book:

I ended up giving the first novel (I just checked out book 2) 3 out of 5 stars, having found Lara Jean to be very relatable, but all the other people in her life terrible. Jenny Han’s writing style isn’t the worst, but it also isn’t great. “This happens. Then this. And this. I’m doing this. This is happening.” It’s a little dry, a little emotionless, but easy to read.

I read Han’s Summer trilogy, which I found impossible to put down (I consumed each installment in a day), but the jury is still out on whether I actually enjoyed the series. If I learned anything from those books, it’s not to get married as a teenager and definitely don’t marry someone who just cheated on you, no matter how much they regret it.

A lot of my teenage anxieties (as well as many of the anxieties I continue to possess) relating to fall in love as a teenager, resonated in Lara Jean, so much to the point that I was crying. I remember exactly what it was like to feel so romantically inadequate–like the people you fall in love with are so out of your reach, even when they’re so close to you (like Josh, who was/sort of still is one of her best friends), and there’s nothing you can do or control to get things to work in your favor.

I was not a fan of many of the characters. While I get it’s in her character description as the self-proclaimed matriarch of the family, I found Margot’s bossiness and self-righteousness to be extremely annoying. It was painful to watch Lara Jean crumble at her sister’s feet and apologize for things (and feelings) that did not justify her having to apologize.

Josh was unreasonably selfish and unfair. I especially didn’t appreciate when he tried to convince Lara Jean that things would have been different if she had confessed her feelings (I didn’t know he could tell the future). I felt that Josh could not grasp the fact that Lara Jean hid her feelings because of her love for Margot.

Peter was not all he was cracked up to be in this story, which doesn’t surprise me considering the unbearable types of male characters Han wrote into her Summer series. When Lara Jean is harassed by her classmates after a certain rumor gets out, Peter does very little to stand up for Lara Jean and his attachment to his ex-girlfriend (whom he’s supposedly trying to get away from) is really unhealthy. Peter Kavinsky may be a sufficient example of the popular boy everyone has a crush on, but he is definitely not the poster-child for a teen romantic hero. He is flawed and I think what truly bothers me about him is that everyone says he is the perfect boyfriend.

Also, I just don’t believe in the whole concept of fake-dating anymore. It’s a trope that no longer makes sense to me–either you’re dating or you’re not.

Lastly, I do not understand why Lara Jean and Chris were friends. Why are teen girls’ best friends always depicted as sexual deviants in young adult novels? Female friendships aren’t just for talking about sex or having someone to get into trouble with.

My thoughts on the Netflix Film:

I’m glad I watched the film soon after finishing the first book because the changes made were very obvious to me, especially the motive behind the delivery of LJ’s letters and the ending. Also, Jenny Han, nice cameo.

While not a huge deal, I was a little bothered over the fact that none of the Covey girls are actually Korean (not sure about Anna Cathcart, though, who plays Kitty). While I understand not focusing on the ethnic aspect of the book’s characters opens up casting for anyone of Asian descent, it’s important to remind everyone that Asians are not interchangeable. But of course, it’s always wonderful to see more Asian representation in the media and in literature. 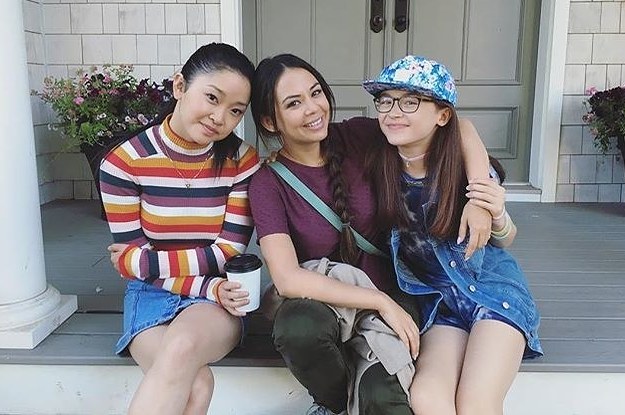 Honestly, the film fixed most of the problems I had with the novel itself. Margot was much more bearable and worth-forgiving by the end. Josh was practically non-existent in the film, so it was harder for me to truly dislike him (he was also much more tolerable).

Undoubtedly, it is impossible to hate Peter Kavinsky, mainly because he’s played by the absolutely charming weirdo, Noah Centineo. Peter was still kind of a toolbox, but he was very funny and I like his emotional depth that is brought out in the film. I was a little peeved, though, that the film chose to give you a few tiny glimpses of Peter’s side of the story:

1) He seems to plant the idea in Josh’s head that he and LJ are kind of a “thing” when he drops LJ off at her house and first proposes the idea to fake-date.

2) You see Gen and Josh in the bathroom together (when she takes LJ’s scrunchie).

The point of the story is that it’s Lara Jean’s to tell and the actions of those around her are sort of unpredictable.

The movie makes it very clear that Peter and LJ are meant to be end-game, while the series is actually 3 volumes long. (But Jenny Han is a predictable author for me…I know she wants Peter Kavinsky to be end-game.)

Chris is a much better character in the film, for sure. She’s supportive and obviously caring of LJ (though, I disagree with her that Peter–or any boy–should be LJ’s reward for being a good human being). I like that she is depicted as a carefree teen with an edgy style instead of a sex maniac.

Genevieve is a brat, but surprisingly, an unfortunately genuine example of a senselessly selfish and arrogant teenage girl who is used to getting what she wants (and hurting anyone who gets in her way). Her beef with Lara Jean is so childish, but so high-school.

The film shifts the story’s emotional focus a bit–Lara Jean’s emotional issues as a teenager stem from the loss of her mother, while Peter’s stem from his father’s leaving for another family. While definitely interesting and insightful, I was a little disappointed because what resonated so much with me personally in the book is that Lara Jean feels almost unlovable, particularly because the boys she loves just don’t love her back. One of the hardest things to accept and understand as a teenager is the fact that you can’t make anyone reciprocate your feelings, but you can’t let those feelings bottle up and grind you down from the inside out.

Aside from the fake-dating, LJ’s writing is what makes Han’s story so unique. LJ uses love letters as an outlet to express everything she’s too scared to say, to prevent hurting her sister and to release the intense feelings brewing inside her.

Verdict: I’m pretty sure I liked the film a little better than the book, just because it solved some of the issues I had when reading Han’s story. I like that Lara Jean’s resilience as a a character is consistent in both formats–she feels romantically deficient, but she also isn’t afraid to tell people when she doesn’t like them. I love that in the book and the movie, she basically says “I don’t want to date you, Peter.” While I love Lana Condor’s LJ, I am much more emotionally connected to book-LJ.

If you managed to make it to the end of this post without gouging your eyes out, bless you!

Feel free to let me know what you thought of either book or the film. I know a lot of people who loved both to pieces and while I don’t love either, I still liked them and believe they hold a lot of value in the realm of diverse YA literature.